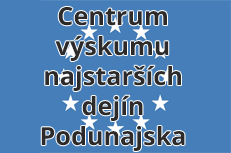 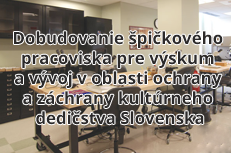 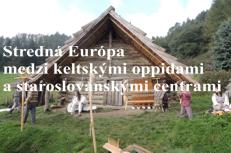 Projects of the Slovak Research and Development Agency (APVV)

Project title:  Process and regularities of settlement development in mountain and foothill regions of Western Slovakia during prehistory and early historical period

Cooperating organization: Institute of Archaeology of Slovak Academy of Science

Understanding and comparison of regularities of settlement development within mountain and foothill regions of Western Carpathians within Western Slovakia during prehistory and early historical period. Understanding and comparison of settlement structure and recognition of settlement differencies in both landscape
types. Definition of turning points of settlement development and (for early historical period) an attempt of their correlation with known historical events. Systematic sampling of selected finding complexes and sites for the needs of absolute chronology as well as other cooperating disciplines with an objective to know and define raw material and environmental background within both investigated landscape types. Mapping the communication lines connecting individual microregions and regions within selected space as well as individual regions with neighbouring territories. On the territory of the Western Slovakia the followed objectives will be solved within the regions of Záhorie, Little Carpathians, middle Váh valley, middle and upper Nitra valley, and Danubian Lowland.

The field research, progresive natural scientific analysis (as geophysic, micromorphology, dendrodating) as well as the theoretical studies contributed considerably to broadening our knowledge about the historical roots and establishment mechanisms of the centres of production and power.  The time and reasons that led to the establishment and extinction of large agglomerations were specified; the economic, strategic and political reasons of their establishment were investigated, as well. To the remarkable contributions belongs the discovery of a new Early Medieval centre of power in upper Nitra valley region. It was determined that also the centres of power of the previous periods of the Celtic and Germanic occupation of the Middle Danubeian region, with remarkable concentration at the territory of Slovakia, originated according to the same principals of demographic and economic growth. The main sites of interest of the research within the project – particularly Nitra and Bojná, with many new  finds of material culture, as well as theirpresentation in the form of audiovisual and exhibition projects and model reconstructions – gained considerable response in the society home and abroad in favour of Slovak science. For the large scope of the researched topic, discoveries of new sites and emersion of new problems it was not possible to conclude the research completely and it will be necessary to continue the in-depth investigation on the qualitatively higher level.

Results of the project evaluation have showed enormous potential in the source base of Slovakia for solving the main issues of the dynamics of the historical development in Europe during the Neolithic, Aeneolithic, Bronze and Iron Ages. Large systematic archaeological excavations were followed by their scientific evaluation and publication. Predictive value of this material has been enganced by adequate co-operation with the natural sciences, mainly metallography, anthropology and archaeobotany. These results were published in monographs, proceedings contributions, published home and abroad (see “ the most significant publications”). The significance and contribution of the past populations inhabiting the territory of Slovakia was clearly demonstrated for economic and social development of prehistoric Europe. It was a particularly important for development of non-ferrous metallurgy and the related development of other crafts in the period of the beginning of the earliest occurrence of metal artefacts, through the massive occurrence to the period of metallurgy. The subject cannot be assessed as definitively closed. While solving new issues of prehistory, production, exchange, social structures and more have occurred that need further evaluation in future.

Project title: Dynamics of the exploitation of silicate material resources during the Paleolithic and Neolithic in the Western Slovakia

Tracing the distribution of the silicate rock resources in the Stone Age provides an important tool for understanding the economics and mobility of individual societies during this period. Basic attribute of the study is the evaluation of chipped stone industry and the determination of origins of the exploited resources, which occur in the ensemble of finds on the individual sites. When evaluating observed problems it is necessary to relate to the geological-petrographic analysis as well to consider the complex technological analysis of the stone silicate artifacts. The main aim of the proposed project is the study of a production technology and a typological analysis of the chipped stone industry. Main goals consist of the determination of form and purpose of import of the material to the settlement, its transformation and the identification of an artefact. It is a product that was the purpose of its production. Information gathered from the individual sites can be compared within certain time frame, as well as between various time frames. Results can refer to the development of production technologies during the Stone Age, from the process of obtaining the material, the primary treatment and the distribution to the final usage in western Slovakia. The adaptation of populations is reflected in the organization of settlements and also in the means of obtaining of the material, which is closely related to cultural aspects.

Project title: Central Europe between the Celtic Oppida and the Ancient Slavic Centres of Power

Geographic and communication attributes, and raw material sources of Slovakia constituted the remarkable preconditions within the Central Europe for establishment of over-regional centres of power. Analyses, evaluation, and comparison of Celtic, Germanic, and Ancient Slavic settlement of our territory will enable an access for expert as well as public audience to the unique sites of European importance. At the end of year 2015 new sites in hinterland of Bojná centre of power has been discovered. Sampling of the sites in Liptov region yielded new information, whose outputs were presented in a scientific study and at the project web site. Successfully were proceeded also long-term analytical laboratory and conservation works of the chieftain tomb from Poprad. Important were presentations of the project team members at international forums with lectures and posters. Information about the course of investigations of project tasks can be found on the project web site where current information about the project works are published, as well as the first outputs of the project co-investigators. Project activities include also popular-scientific events.